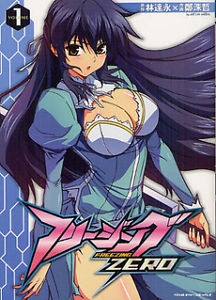 This week we did the show just before our local Comic-Con. Which was impressive as we’re pretty lazy and tend to slack on shows around convention times. The only thing we figure is someone left us a brick of cocaine which we dropped into our tea. Nothing quite like powdered motivation to ensure we get things done.

Tim reviews, apparently, a sequel to something we’ve already reviewed, Freezing Zero. Way back when we were still in the one hundreds(Tim believed it was in the 120’s though it was 177) one of us did the manga Freezing. This is the spin off which features, presumably, the same main character. Tim describes it as Evangelion, swapping out Shinji for a Tits McGee and Angels for Novas. While it attempts to spice things up with exposed nipples, it’s far too boring to be interesting. It gets Burn It for being an obnoxious clone.

Weltall then talks about Musunde Hiraite(by Minase Mayu). We specified the author as just image searching the name pulls up pictures that have nothing to do with the manga Weltall reviewed. It’s a bit confusing as it doesn’t follow the format we’re quite used to. The first chapter revolves around one person desperately trying to confess to a girl. Then a character from that chapter gets a promotion to protagonist for the second chapter. The unique storytelling device was interesting by not buttressed by enough story to earn more than a Borders.