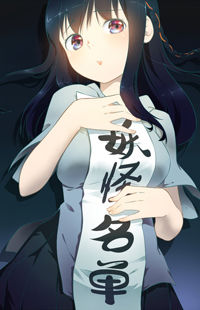 So we haven’t heard any threats, veiled or otherwise, regarding the site’s visual facelift. If anyone was going to send us a murder-gram, we figure it would have happened already. Having not, we assume that everyone is pleased and glad to see. Also, we want to remind folks that the forums are alive and ready for action. We have pruned down the maze into something more straight forward regarding the shows.

Tim reviews T-Rex na Kanojo. After trying to convince us that Tim doesn’t put on a scale suit and demand to be called a clever girl, he gets to the manga. It’s about an alternate universe where dinosaurs avoided extinction by growing breasts and fuckable mouths. A girl T-Rex meets our main guy(Tim never says his name and we can’t be bothered to look it up)and they start being friends. Wackiness ensues because she’s a T-Rex and like to eat things. Without much of a plot to hang the comedy routines from, it suffers and drops to a Borders.

Weltall then taps the great firewall and gets Yaoguai Mingdan. There’s a guy in college and he sees what appears to be fox girl through a butter cannon. She winks at him and then fights another girl who is actually a tree who screws men to death for their energy. None of that is a word salad topped with verbal ipecac, we swear. He’s special and fox girl wants to save him until he’s ripe for the picking. It just barely avoids enough tropes to bump it up to a Crackers.