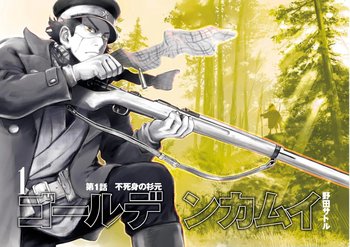 Do you like panels? We sure do. Our favorite is an unstained pine with a light varnish, mounted with finishing nails against studs. Sometimes we like to gather panels from conventions for a more eclectic look. You might deal with some screaming as you drive some of the hosts to the wall. That’s why this episode is brought to you by FratDrops chloroform. FratDrops, when you absolutely need to score.

Tim reviews more of Golden Kamui. It continues the trend of historical fiction, action and recipe guide. It keeps the coveted rating of Read It Now. Tim also brings in a bit of chopped and broken information on the rifle Sugimoto uses, the Arisaka Type 30. If you want to know more about it, we recommend watching the excellent video by C&Rsenal on this Japanese rifle which would end up in the hands of Russians because money overcomes all prejudice.

Weltall then talks about Catharsis. It features a guy called Leon, who has dreams where he’s other people. This would not be so unusual, at least until he runs into a person and a monster from one of his dreams. If this sounds rather thin, believe us it is. There’s about three regular manga chapters’ worth of content drawn out over nine. While the content sounds padded, it’s paced well enough to get a Borders for the trouble.