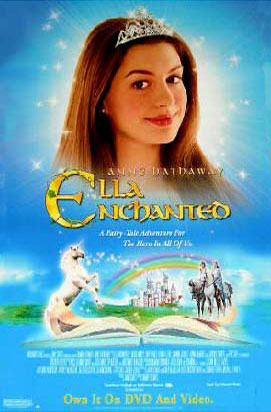 Now for something a little on the lighter reading side. Tim and Vanessa read and watch Ella Enchanted. The story takes place in a somewhat fairytale world where there are centaurs who are basically dumb children along with giants and fairies. An obnoxious fairy bestows what she considers a gift upon the main character, Ella. She has to be obedient to anyone who tells her to do something. This causes her life to become hell when an evil step sister discovers this gift.

To say the movie differs from the book is like saying an episode of Law & Order directed by Tarantino would contain a thousand percent more racial slurs. There’s plenty of anachronisms left in there and we couldn’t determine if it was supposed to be humorous or not. Such as the use of an escalator in the middle of a medieval market or Ella singing Somebody to Love by Queen for no apparent reason.