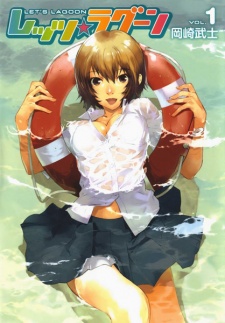 What’s the best way to make a movie that makes all the monies? Just make a sequel, of course. But what if your studio doesn’t own the rights to anything currently popular because you weren’t busy buying the rights to every comic book out there? That’s when you dig through your catalog and make an illegitimate sequel to something people still talk about. If that fails, you at least have a tax write off and the knowledge that you did everything you possibly could.

Speaking of sequels, Tim’s manga is Donten ni Warau Gaiden. It’s a sequel or perhaps an epilogue to another manga. It’s set in the meiji era, which is basically Japan’s wild west for how it’s romanticized. Some people were supposed to fight a snake thing and they won, apparently. Also there are creepy ninjas who are or were crazy in that they forced their members to kill family to join the ranks. It’s intriguing enough that Tim gives it a Borders and may read the original.

Weltall then reviews Let’s Lagoon. In in, the main character awakens on a deserted island. He was apparently in a naval accident but can’t remember what happened. He’s joined by a girl and eventually an older man who is a teacher of hers. When the main guy ends up being pulled away by a riptide into the ocean, he awakens and finds he was only gone for fifteen minutes. There’s time screwiness somehow involved with the ocean and people trying to drown themselves to end up on the island that time forgot. It gets a Read It Now.