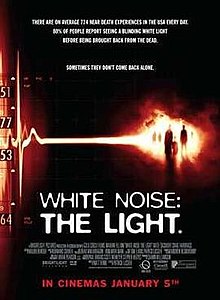 Let’s say you managed to make a horror movie using a, then, relatively unknown paranormal phenomenon. You’ve managed to recoup your costs and make a tidy profit to the surprise of everyone. A sane person would pick up their chips and head to the cashiers window, turn it in for a check, then head up to their now comped room for a nice rest before celebrating with a nice dinner. Someone with a gambling problem would say to let it ride and be surprised when the roulette wheel doesn’t land on thirty six a second time.

Which is how we got White Noise 2[2007]. Nathon Fillion replaces Keaton as our dad figure. When he wife and son react to their diner breakfast like they had just sampled from the desert bar at Golden Coral, they get shot to death by a passerby who turns the gun on himself. When Nate tries to kill himself and fails, he can now see auras of people who are about to die. What in the grand hell this has to do with EVP is beyond anyone’s guess.

Tim’s movie is Swiss Army Man[2016]. Daniel Radcliffe plays a corpse who befriends Paul Dano. Which makes it sounds like the autobiographical tale of Michael Cera meeting John Mcain. Dano plays a loser who may or may not get lost on an island who escapes because Radcliffe’s corpse saves him and has odd abilities like being able to snap his fingers and start fires. And the boner compass. Can’t forget the boner compass.

Weltall goes back to Youtube and finds something amazing in that it’s completely politically neutral and awesome. Ants Canada is a channel by a man who own ant colonies that put those silly farms to shame. Episodes are done with a focus on topics like trying to protect them from outsiders, finding them proper food. Getting rid of rogue escaped ants. All done with nature channel quality and enough science to keep the nature minded happy.

One Reply to “Popcorn Pulse 89: The Light”