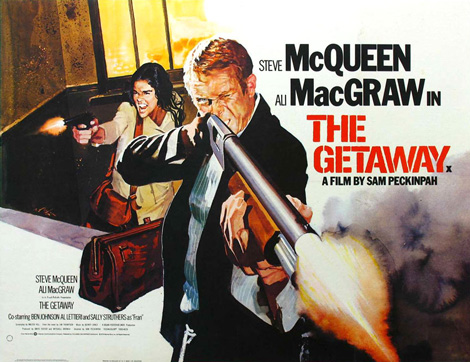 As we’re getting on in episodes, we must be getting crotchety and senile. Today we’re focused on a film from the seventies when men were men and people drove nothing but muscle cars. Smoking was breathing but for cool people who didn’t do pussy things like save for retirement or plan for their future. People who did such things were clearly communist sympathizers that needed to be shipped to Cuba.

Today’s joint review is The Getaway(1972). It stars Steve McQueen who’s character is imprisoned for something and getting denied parole. The only recourse is to have his wife sleep with someone who has th authority to let him out. Even so, this isn’t enough as he has one more job to do before he’s free. It’s a heist movie that turns into an escape film as in the name.

Weltall then talks about Demolition Man(1993). Because there’s nothing quite as amusing as a future envisioned in the nineties that gets almost everything completely wrong. Wesley Snipes is a bad guy who going to cryo-prison along with the cop who arrests him as Snipes blames the death of the hostages on Stallone. They’re woken up in a future seventies years after the nineties where everything has been sterilized into a semi-utopia to wreak havoc.

Tim, unconsciously keeping in line with the theme of police, talks about Maniac Cop(1988). Who it stars is unclear as Bruce Campbell is credited but doesn’t show up to about a third of the way in. A rogue, tall cop is killing people for no reason which leads detectives to find the nearest guy who’s six foot and put him in cuffs. Naturally this doesn’t stop the killings of a possibly supernatural murder who was a disgraced cop.