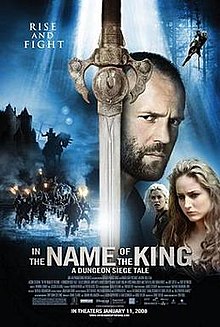 Considering the recent news on the passing of Burt Reynolds, we figured we should do something of a tribute episode. Which is why we choose an Uwe Boll movie to jointly review. In the Name of the King[2007] is what happens when someone watches the Lord of the Rings and decides to push their fanfic off as a screenplay.

Jason Statham is the main character who is called Farmer. Not a problem in a universe where other characters have ridiculous names like, say, the Discworld series. Quite a glaring issue within a world where no one else is named after their profession. Ray Liotta is busy trying to capture the ham of Jeremy Irons from Dungeons and Dragons. Burt is busy thinking about the glory days of Gator and Smokey and the Bandit.

Weltall then talks about Sharky’s Machine(1981). It’s about a detective who ends up in a botched drug bust where another cop dies. Disgraced, he gets transferred to vice where he busts a prostitute. She turns out to be part of a high class prostitution ring. This leads him to a crime syndicate who’s using it to blackmail a politician.

Tim then talks about Rent-A-Cop(1987). Burt plays a cop who is part of a drug bust that goes bad and other cops die. Disgraced, he ends up working as a security guard. At least that’s the promise of the synopsis. A prostitute, played by Liza Minnelli, who witnessed the murders tries to enlist him for protection. Things happen and attempts at jokes are made. The only one that lands is that anyone would have paid Liza money for sex in the eighties.