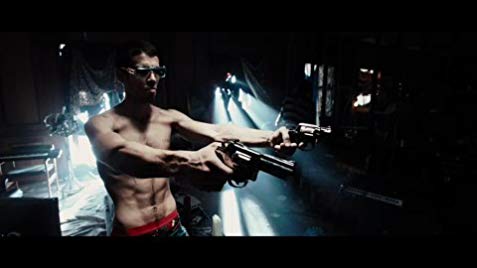 If there’s on thing that movies have taught us is that all real estate developers are evil. Whether it’s attempting to tear down a youth center or buying the foreclosed home from a grandma, they’d powder orphan and snort it if they thought it would help them get rich or high.

To that end, we watched Rocknrolla[2008]. It’s about a shady British land developer who rooks a couple of criminals for their investment money, keeps the land and tries to sell it to a Russian. The Russian loans him a painting which then gets stolen and threatens the deal. Everyone and everything crashes into each other towards the end because this is a Guy Ritchie film and that’s just how he operates.

Tim then reviews A Cure for Wellness[2016]. Tim normally doesn’t hate slow and atmospheric horror movies that eschew jump scares. This movie takes a lot of boring horror cliches extracts any character drive and tells the audience to go pound sand. It’s a weak body horror movie set in a creepy asylum that runs far too long and is so predictable an AI probably wrote it. Oh look, the guy with the german accent is evil? What a twist.

Weltall then reviews two Youtube channels. Gas Station Encounters is a particular chain of stations and their encounters with the wacky customer base that happens on a regular basis. Because even the mentally unstable and the Klepto’s need cigarettes and fuel. He also talks about The United States Chemical Safety and Hazard Investigation Board. It’s the least sexy name for a channel but it has some wonderful documentaries made by the government on accidents.