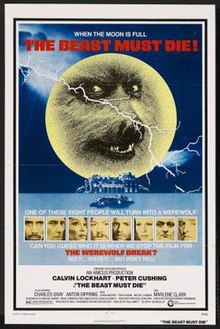 It’s October and that means a lot of people making lists of scary movies or pimping classic ones. We like to think we do a little better by shining a light on movies that have gone forgotten and unloved. For that reason, and not because Tim likes to drag out old crap movies from the dumpster like a hoarder collecting furniture. “It’s still good.” He says, staring at the bed bug infested recliner. “I can’t believe someone would just throw this out.”

We jointly discuss The Beast Must Die(1974). For once Tim has picked an actual good, bad movie. Calvin Lockhart plays a rich man who wants to hunt the most dangerous game. The twist is, that’s not people but rather the werewolf. He has gathered a guest list of people who could very well be werewolves(say that three times fast.) During the course of the film he has to find out who is the werewolf and will he be able to kill it?

Tim reviews a movie which had an internet micro-versy about it back when it was announced, No Escape[2015]. Owen Wilson plays an engineer who goes to some unnamed, for real life political reasons, country in the middle of a revolution. He then has to try and keep his family safe and escape. Something that wouldn’t be possible if he didn’t get help from the criminally underused Pierce Brosnan who dies heroically to save them later.

Weltall then reviews Den of Thieves[2018]. It stars the temporary patron saint of the show, Gerard Butler who uses his accent to charm a rag tag group of misfits into a group of thieves. Wait, no he’s the cop investigating a group of thieves which make high profile heists and are targeting the Federal Reserve. So it’s a detective movie and a heist movie where Gerard never yells “This is So-Cal!”