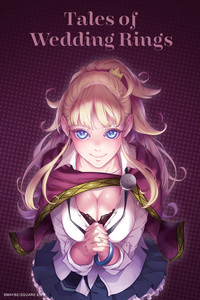 We like to have some post show discussions once in awhile. They usually aren’t recorded as they’re not very long. Tim is always begging off because he says he needs to go eat. This is accompanied by him dramatically clutching his middle and collapsing into a heap while asking for soup or breadsticks like this is an Olive Garden and not a makeshift recording studio.

Appropriate then that Tim reviews Shokugeki no Soma. Soma is a student who works at a ramen shop and is attempting to best the owner in a cooking contest by making odd dishes like peanut butter and squid. One day he is forced to defend the shop from evil land developers by cooking with limited ingredients. It turns out he’s quite good when he’s not experimenting with things and saves the day. So the owner shuts down shop and sends him to a prestigious cooking school. It gets a Borders for being a rice cake of a manga.

Weltall reviews Tales of Wedding Rings. Our dish rag du jour is Sato who’s childhood friends with Hime. Some time in the indeterminable time between high school or middle, Hime ends up traveling into another dimension and Sato tags along. She is betrothed to a prince who is about to marry her right until a demon attacks. Hime kisses Sato which makes him married to her and grants the power to defeat the demon. Realm saved, right? Wrong. Sato now has to go out and collect his harem to gain enough power to beat the big bad. It also gets a Borders.