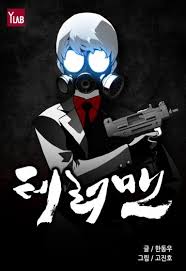 Bob Ross always like to say there are no such things as mistakes. Only happy accidents. This is pretty easy to say when you paint for a living in a studio without anyone to backsass you. For those of us living in the twenty first century with access to multiple forms of instant communication, this compounds things and makes mistakes impossible to avoid.

Which is how Weltall and Tim both ended up reviewing the same manhwa, Terror Man. We kick off with our protagonist sitting in class getting challenged by a classmate to rock paper scissors. He never loses because he has “eyes of misfortune” that turn the wrong choice into purple. This also allows him to cheat at tests.

Luckily the author knows we’re not interested in seeing this develop into some love triangle at school because a transfer student shows up and is purple. He goes to the mall with his dad’s live in maid. She’s from Russia and loves pressing her large breasts into his face to tease him. When he tells her he sees the building is purple and figures it will collapse, she asks him how they should evacuate people.

They, reasonably, come to the conclusion that no one will believe the place will collapse without evidence. Instead of pulling the fire alarm, she calls a friend to bring over guns so they can spook everyone out by pretending to be terrorists. Yes, that is a much better plan than calling in a bomb threat.

Tim read ahead a bit further than Weltall and found this appears to be the start of a theme where the protagonist runs into a disaster and decides to dress up as a terrorist to save people. It manages to land firmly in Read It Now territory.