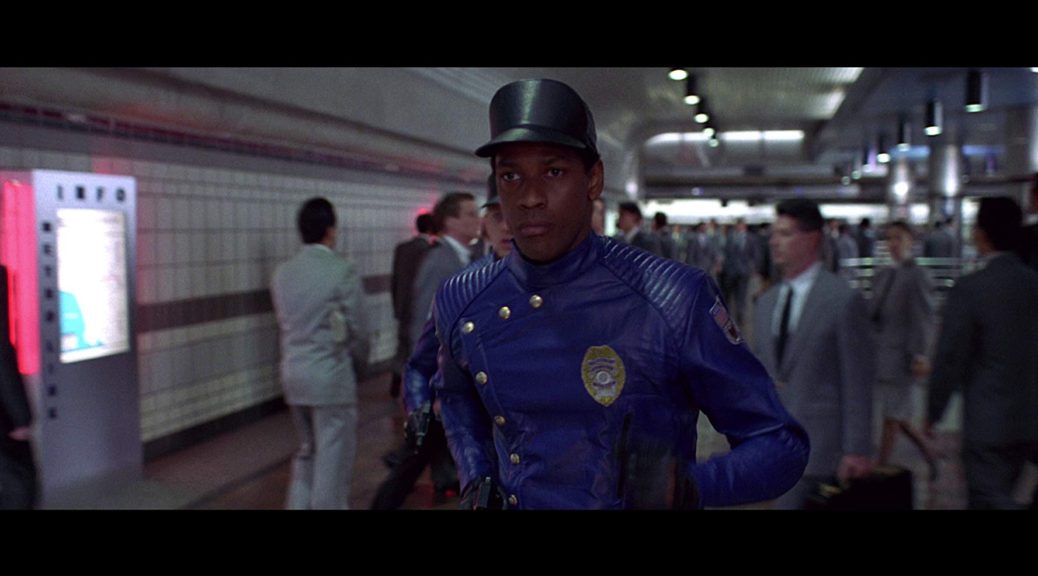 Wouldn’t it be crazy if everything was a simulation and we were all just programs in it? Not really as it wouldn’t change your day to day goings on. Thankfully that’s not the question asked by the nineties in Virtuosity(1995). Because there wasn’t a lot of room for movies in that era asking if we lived in reality or not and most of that space in pop culture was reserved for the Matrix with a small corner carved out for The Thirteenth Floor.

Denzel Washington is Denzel, he is a disgraced cop. He’s in prison but participating in a virtual reality program which pits him and another fallen officer against an AI played by Russel Crowe. When the simulation goes wrong and Denzel’s virtual partner dies in the game and real life, there’s threat of shutting down the program. The head of the program’s answer to this? Put the amalgamation of serial killers and hitler that is Crowe into a nearly immortal nanomachine body. Of course this requires the one person who caught him to be released to chase him down.

Tim hits another Denzel science fiction movie with Deja Vu[2006]. It starts off as Denzel investigating a terrorist attack that hit New Orleans. He’s a cop who’s better at the job than everyone else. So he gets pulled into assist some suspicious people who can magically see anywhere in the city four days ago. It turns out that they have a miniature black hole which can peer through time. They swear that no one can go back in time which is why Denzel will do so to save the girl.

Weltall reviews Hostage[2005]. Bruce Willis plays a hostage negotiator. Like in any movie about a hostage negotiator, the plot is not related to a crime where there’s a hostage situation involving strangers. That wouldn’t be high enough drama for Hollywood. So his family gets taken hostage and he has to try and save them and another family that are hostage. Bruce probably fails and ends the movie by checking into a sanitarium for substance abuse.