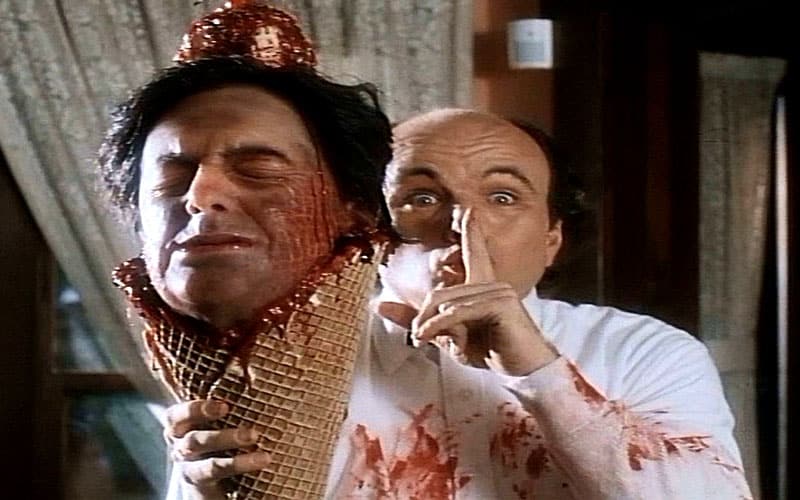 Deep in the heart of every video rental store of the nineties there were a few VHS tapes that were ubiquitous. These were the movies that were not ordered by the owners. They simply appeared on the shelves complete with worn stickers and suggested rental prices that were incorrect. One such film is Ice Cream Man(1995).

Starring everyone’s favorite budget monster, sans makeup, is Clint Howard. He plays a man who witnessed an ice cream man getting gunned down as a child. Grown up and released from the mental institute, he now runs the ice cream shop and truck. He also murders people because that’s what you do when you’ve witnessed a murder. He’s being investigated by a group of kids who are aping a Goonies thing if you’d only ever seen the poster for Goonies.

Tim then talks about Meet Dave(2008). A movie written by Bill Corbet of MST3K fame lead by Eddie Murphy. He plays the captain of a ship that is shaped like himself. Sent to earth to collect a rock which is supposed to absorb our oceans to power their planet, their mission changes as they befriend humans. Tim’s judgment is that it’s not as bad as so many other Murphy films but clearly suffered a rushed plot.

Weltall then goes back into the archives of TV land with the original Dragnet(1951-1959). A pioneering show of it’s time that managed to break ground into the true crime genre. Using existing cases, changing the names for privacy, they reenact investigations leading to the arrest. This culminates in a short update at the end detailing if the criminal was caught, sentenced or awaiting trial. It serves as a fascinating look into early television and detective work.