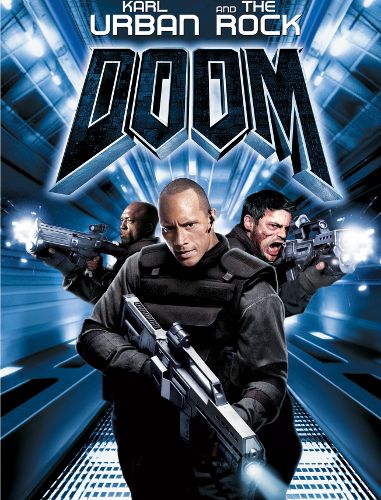 Video game movies are kind of like corn blight. They’re things that devastate whole crops of but only ever seem to effect monocultures. We’re not even sure if that thing lands or not. Our joint review is for Doom[2005]. It’s one of the early crop of game adaptations which continued to add evidence that no one in Hollywood has ever touched a controller.

It stars Dwayne Johnson, around who scripts simply materialize, and Karl Urban. There’s an archeological expedition on Mars that sends out a distress call. Turns out they found ancient fossils of humans with perfect DNA. Naturally scientists have been extracting that which promptly turns the station inhabitants into vaguely demons from the game.

Naturally the megacorp running the show wants a sample of the virus/DNA/magic goo. Dwayne turns out to be a traitor who takes his orders to kill his team and any witnesses. Karl has to thwart this after getting injected with the advanced DNA after being refined.

Tim dives into a movie less than five years old with the remake of Overboard[2018]. Ana Ferris is the blue collar working woman who runs into a spoiled Spanish trust fund baby. When family drama leaves him with amnesia, she convinces him they’re married and makes him work. It’s a lazy, overlong remake that was made to imply cash in on the title of a well remember movie. A couple of moments work out but the movie would have benefited from taking a swath of cuts.

Weltall reviews Flight Plan[2005]. A Jodie Foster movie where she plays a flight engineer heading home from her husbands funeral with her daughter. She takes a nap and wakes up to find her daughter missing. It turns out Jodie is being gas lighted in the actual sense, not in the way a twitter user will claim you are when you call them a fool for believing the “mandela effect.”