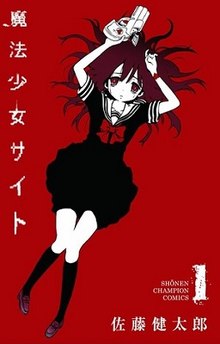 This episode was going to be posted earlier but it had gone missing. Probably because it’s four oh four. Alright, restrooms are back and to your left. Please tip your wait staff. G’night!

Tim reviews Mao by Rumiko Takahashi. Our main school girl, for it is always a school girl, Nanoka is busy seeing ghosts and trying to be normal. See her parents died in an accident and left her to be able to see ghosts. Luckily this recycled plot is mashed together with another when Nanoka wanders through a spot which transports her to the nineteen twenties Japan. Back when a white hair dude is running around executing demons. Having a bit more gore helps spice things up but it’s still standard Takahashi fare. It gets bumped up to Borders for having no sign of the tokens we’ve bitched about before.

Mahou Shojo Site. This is a title of a manga, in theory. Weltall swore this was the title of his manga. And, based on the review which earned it a Read It Now, it was quite good. This might be confusing as That just translates into Magical Girl Site which, if you were to just google, might puzzle you as you stumble through sites dedicated to the magical girl genre. This one is a spinoff of the magical girl apocalypse where Aya gets powers granted by a website. This leaves her with a pink gun that kills people she shoots by arranging their death in a randomly acceptable way like being hit by a train.