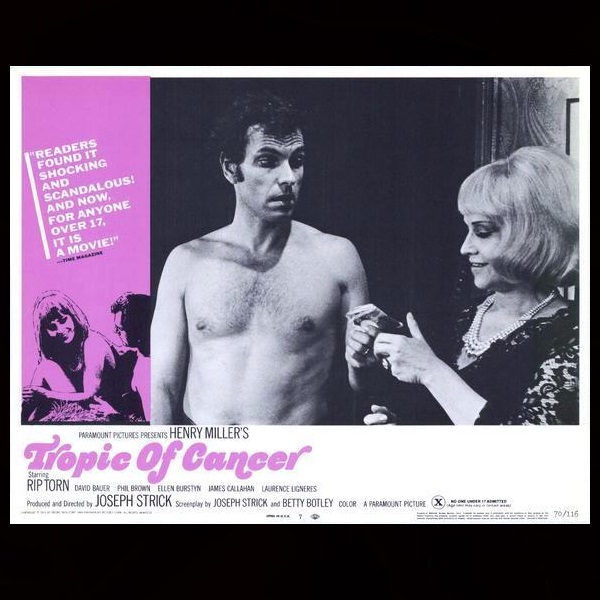 As each year passes we lose a few more established actors. Once in awhile this news bubbles up to us and we make a show in remembrance of them. Plus maybe it can drive a few clicks our way if someone stumbles upon us looking for the actors we’re talking about. This time we look back at Rip Torn who’s best known for being the rough, curmudgeonly, old guy who back and mumbles profanity at the protagonist. Even when it’s rated G, there’s the implicit swearing.

We jointly talk about Tropic of Cancer(1970). Based on the book from the sixties, which was set in the thirties in France. It’s an autobiographical account of the author, Henry Miller, fucking around France in a literal and figurative manner. He drives his wife off right away by being poor and shiftless. He then spends way too much time screwing the wives of friends, spending other people’s money, and ruining relationships. It’s interesting if only because Rip Torn doesn’t look like the living scrotum that he would become.

Tim then reviews The Insider(1999). Rip Torn’s part is incredibly small, because that’s what he normally does. Russell Crowe plays Jeffery Wigand, the VP of research and development at Brown and Williamson. He’s famous for doing a sixty minutes interview where he said they ignored direction to make safer cigarettes. It’s two hours about the interview and not nearly exciting as they’d like to make it. We’d recommend you just catch the interview on Youtube and save yourself an hour and a half.

Weltall couldn’t settle on a Rip Torn movie, having refused categorically to discuss Men in Black. He talks about the resurgence of Minecraft channels, Mumbo Jumbo in particular. Apparently there have been a lot of additions since Tim and Weltall have last played. The dedicated crazies have made some incredible things like devices that strip huge swathes of land.