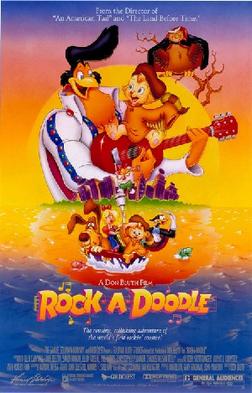 Oh crap. Show. Ugh, how about a Don Bluth movie? No, not one you like or have probably seen. We did Rock-A-Doodle(1991). It’s about a rooster who believes he crows the sun up but the sun rises without him one morning which makes the other farm animals laugh at him. So he runs off to the city to become an Elvis impersonator. The protagonist gets sucked into his story book from the real world, gets turned into a kitten, and has to set out to bring cock of the walk back to try and stop the rain. Also there’s an evil owl.

Tim keeps going animated with Rover Dangerfield(1991). What kids in the nineties didn’t love Rodney Dangerfield? With how popular his films were amongst kids, like Back to School and Lady Bugs, it was inevitable that a ground breaking classic like this would get made. The scene where they father takes Rover into the woods to kill him, only to be savaged by wolves befre Rovers saves him earned Rodney his fifth academy nomination. Let’s not forget the tastefully implied dog on dog sex that is responsible for a generation and a half of furries.

Weltall breaks the spell with Basic[2003]. John Travolta plays a military guy investigating drugs on a base. They have a Roshamon thing going where the story gets told multiple times from the perspectives of the survivors. Nothing it what it seems which is a surprise because we thought Travolta was going to turn out to be an actor and not a weirdo who grimaces when directed to smile.