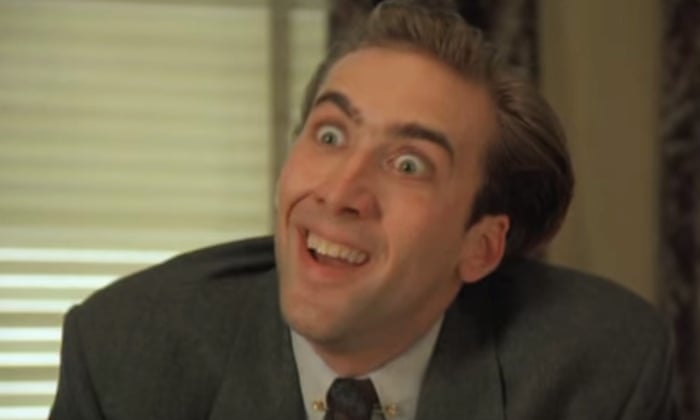 What to do for movies. Shit, we know we watched something we could do. Fuck it, Nicholas Cage it is. Time to break out Vampire’s Kiss(1988). One of Cage’s first roles where he brings a woman home back to his place and starts making out with her. Things are going well enough to start undressing. At least until a bat comes in.

He gets bit and goes a little loopy. Becoming convinced he’s turning into a vampire. This causes him to browbeat his secretary and yell at his therapist. If nothing else, this movie is at least the source of one of the best Cage faces, the “you don’t say face.” We don’t recommend it unless you need a laugh.

In the same vein, heh heh, Tim has Wolf(1994). Jack Nicholson and Michelle Pfeiffer star in a movie where Jack is a schlubby editor on the out. James Spader is muscling him out of his job, his wife, and he’s being forced to transfer to Ukraine. Until a wolf bite begins to transform him into a werewolf. This means mostly Jack growing a spine and taking charge of his life. Also, peeing on James Spader’s shoes.

Weltall has the Brad Pitt vehicle, Ad Astra[2019]. Brad is an astronaut who’s dad went off into space and never came back. Apparently cigarettes from Saturn are super awesome. Until some shit starts happening and the government needs someone to head out as they figure Pitt’s dad is the source. So off into space he goes.