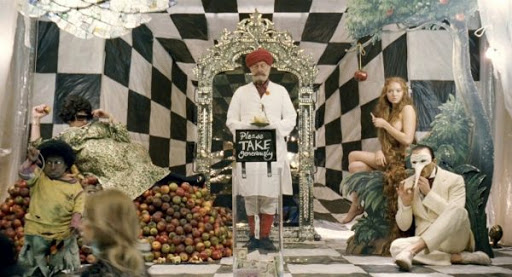 Let’s talk tax evasion instead of movies. You know how any number of actors or musicians have tried to avoid taxes by not paying them? The director of today’s film decided to skip that and just give up his US citizenship. So we have Terry Gilliam’s Imaginarium of Dr. Parnassus[2009].

It’s a story about an ancient monk who’s made deals with the devil throughout the ages. Culminating in him having one go at mortality and having to pay the devil with his daughter. It’s a lot of wild imagery and works well around the death of Heath Ledger who was to be the protagonist.

Tim has Suburban Sasquatch[2004]. You know how independent films are often made by aspiring directors who want to make good movies and are often constrained by budget and talent? This isn’t one of those. It’s what happens when someone makes a film on a bet and features a teleporting big foot that kills prop dogs. It should serve as proof that any one of you could make a better movie with a phone and access to a pop-up Halloween store.

Weltall has Fleabag. It’s a two season British comedy about a woman who drifts between awful guys being a horrible person. Reviews like to play up the “trauma” of the protagonist but she’s a shit bag and it’s fun to watch her fall face down into situations. Plus at twelve episodes you can watch it in a week if you take it slow.