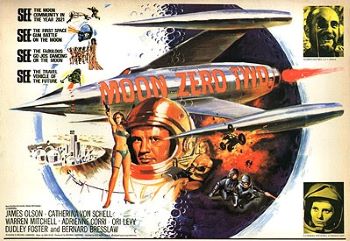 First up is Moon Zero Two(1969). A movie chosen because it is set in May 2021. When we have an established moon base and our hero was the first person to land on Mars. He gets contracted to divert a meteor made of sapphire to the moon where it can be mined. Unfortunately for him, the man with the wallet has a monocle and a van dyke. It spells evil with a flickering V.

Tim then hits up 2010: The Year We Make Contact(1984). It’s the sequel to 2001 and follows sheriff Brody. He planned the original mission that went tits up like a Twitch thot in a hot tub stream. There’s a joint mission between the US and USSR to go and figure out what happened to Hal and the rest. Because there appears to be another monolith circling Jupiter and it’s much larger.

Weltall then has Nobody[2021]. The movie staring character actor Bob Odenkirk. He’s a former badass who lives a suburban life. Unlike a certain Mr. Wick, he’s aching for the opportunity to murder some people. Lucky for him there are mindless mooks out harassing people in his eye shot and beating them up drags him into a whole mess.