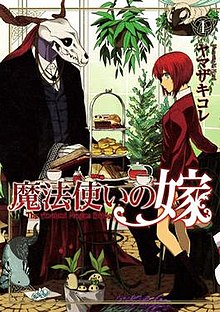 Welcome to the AP border town. Please have your papers in order. You there, step quickly. Hmm. It seems you have “Ruby” listed as a favorite anime. Problem? Oh, there’s no problem. It just means those burly guards to your side will be escorting you to a re-education center. There you will get a double dose of manga that should put you back into alignment. Should we fail to remove that OEL from your fav, we have more brainwas-er, courses for you to take.

Tim has The Ancient Magus’ Bride. The adaptation of which was done by the AP crew. We have a girl who’s being sold as a slave to a man who has a horse skull for a head, or possibly an antelope head based on the horns. He’s bought her to be his apprentice and wife and she’s just the most special thing that’s ever come along. It get a Borders though.

Weltall has The Hero Who Returned Remains the Strongest in the Modern World. We start off with a protagonist who is bullied in school. One day he retreats to the shitter and gets transported to a magical world to defeat the demon king. Which is were so many Isekai would start. This skips over his herodom and has his return to our world. Where he still has all his powers and the ability to see a menu. It also lands on Borders.