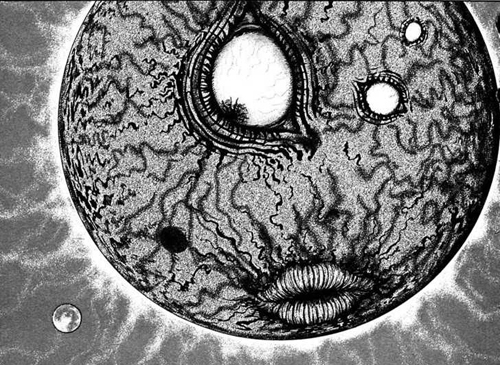 Hark! Who goes there? Long live the king…of Manga. There’s something rotten in the state of manga. It seems we have two volumes and nay a reviewer in sight. Unless thereupon the horizon, there are two figures approaching. They seem to be bearing two volumes which may sate our desire for reviews.

Tim revisits My Dearest Self with Malice Aforethought. Eiji is struggling with the gang and them noticing their missing funds. He’s also approached by the Lolita dressed classmate who’s the only one who noticed his personality shift. She blackmails him into going with her to interview the murdered girls’ friend. Apparently Wednesday Watanabe was friends with the dead girl and wants some answers. While there’s a bit of plot contrivance from her, it hops up to a Read It Now.

Weltall has a Junji Ito work with Remina. In the nearby future an astronomer sees a new planet. He names it Remina after his daughter who was born the same day. Unfortunately, it seems to be coming right at earth moving very fast. Sometimes faster than the speed of light. This incoming gravity well is wrecking havoc in the solar system. So the natural reaction of the mob, which has formed, is to sacrifice Remina. It gets a Crackers as we don’t want to spoil much of it.