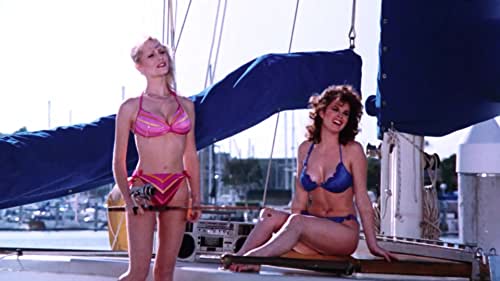 Another year, another harvest of actor deaths. We definitely don’t take advantage of this to choose movies or anything. It’s certainly a tribute to their craft. Yes, that’s what we’re going to go with. Who to pick this week? Fuck. We didn’t think that far ahead. Art Metrano it is.

We jointly talk about Malibu Express(1985). One of the first movies by Andy Sidaris. A man famous for putting in gratuitous nudity, guns, and explosions. The main character is Cody. He’s a private investigator who’s on his first case investigating or maybe guarding a family. There’s someone stealing chips from the US and selling them to the Soviets. Not that it really matters as this is all an excuse to feature topless Playmates.

Tim has Sleepless in Seattle(1993). The second in romantic comedy trilogy of Tom Hanks and Meg Ryan. Tom Hanks is a widower with a kid and he’s sad. Meg Ryan lives across the country, hears him on the radio, and develops a crush on him. The whole movie is more of a list of missed connections culminating with them meeting at the very end.

Weltall has Negotiator(1998). Sam Jackson is a hostage negotiator. He works with a team who’s got a few members that are on the take. When he gets close to discovering this, they betray him and make it look like he killed his partner. So he takes some hostages to sort things out. It’s kind of those when all you have is a hammer, everything is a nail kind of moments.