DISCLAIMER: I REALIZE THAT THE SUPER POWERS FROM BOKU NO HERO ACADEMIA ARE CALLED 'QUIRKS'. THIS IS NOT ABOUT QUIRKS OF THAT KIND.

Anime plays host to many different types of characters and at times their individual quirks can be just as memorable if not more than their character design, voice etc. Whether it be a certain laugh, verbal tic, a gesture or expression (anything really). Please share your favorite quirks down below and the character(s) that they belong to.

This forum question is brought to you by user BlackMagic4444, thanks for that mate.

(Wow, haunting the forums right when Andrew is posting a new topic. So...)
First response!

Seriously, though... the first quirk I think of is the one where a character with glasses pushes them back up on their face, from a position slightly lower down their nose. It is a trope that once seen, you cannot miss, and it can become annoying if done too often or without the right timing. My initial reaction was that Japan must issue a lot of off-the-shelf/non-personalized eyeglasses as a general practice, such that they often do not fit the wearer's head and face properly. But then it is often taken to hilarious extremes, as if it is a form of fan service for Meganekko fetishers or something. And not everyone who wears glasses in Japan can possibly have such ill-fitting frames.
Usually this is done by unsure characters to emphasize their uncertainty, and can garner empathy for a young girl character.
But then there are the "cool" glasses characters who will use this gesture very dramatically, to emphasize they are now getting truly serious about a given situation, as part of winding up for some verbal action or combat maneuver to come. And if they are also viewing their target askance from the corner of their eyes as they push the frames into place, it adds a super saiyan, power-up to the effect.

Finally! A question that I can answer without much difficulty! I like characters that are happy go lucky but not hyper. The hyper ones exhaust me. So happiness is one quirk I like. For example Pikari from Amanchu is not a happy character the way i like happy characters. she is a bit too hyper. More along the lines of Ai Ninomiya of Amanchu is more the happy character I like. She isn't hyper but she loves to joke around and pick on her brother lol.
Queen Inoue Shiromaka

Characters that have mastered something like in Seirei no Moribito (Balsa) and Samurai Champloo (Jin & Mugen). In shows with these traits usually there is someone that is a foil character (Chagum & Fuu) in their respective shows. This usually allows more world building and another way to challenge the main characters. In the case of Balsa she has mastered her skills with the spear for the most part living the life of a mercenary. Then she suddenly now has to take care of a child. In Samurai Champloo Jin & Mugen have to deal with Fuu's quest. Having this point of time being the focus you can pivot and show more character backgrounds if you have a longer show. On a shorter show you can challenge the main characters due to circumstances with the world around them or their daily life. You may not get as much background but it allows you to explore the world without the crutch of a character that is too weak or needs a training montage. So character Quirks can effect even the type of shows I enjoy and lends itself to a certain types of story telling.

For example if your familiar with Lupin the 3rd they base the show on the 3 main characters skills and you can tell a good variety of stories, and in different locals. While some shows may get bogged down due to some characters being too undeveloped and you run into the issue with rushed endings.
Last edited by Deathgod on Sat May 26, 2018 6:58 am, edited 1 time in total.

The first thing that comes to mind is when a male character just don't give a poopoodoodoo about the female characters cliche reactions like "You're a perve" etc.
Also, generally an MC is not a complete noob and a total wuss who doesn't know better is always a big plus.
Top

My favorite has always been the Cheshire cat grin. It is usually made by characters who know more than they let on or by tricksters who are up to something. Some notable examples are Lupin the 3rd, Kisuke Urahara from Bleach, Haruko of FLCL, Ed from Cowboy Bebop, And my personal favorite Ichihara Yuko from xxxHolic.
Don't get left, just get on your good foot.

The "SHAFT Look" AKA the "SHAFT Head Tilt". It's an odd stylistic look the characters have in any Anime that is animated by them. This is when the character turns to look at the camera (Presumably at another character) and tilts their head back at the same time. As modelled by Hitagi Senjougahara from Bakemonogatari and the other Monogatari series. 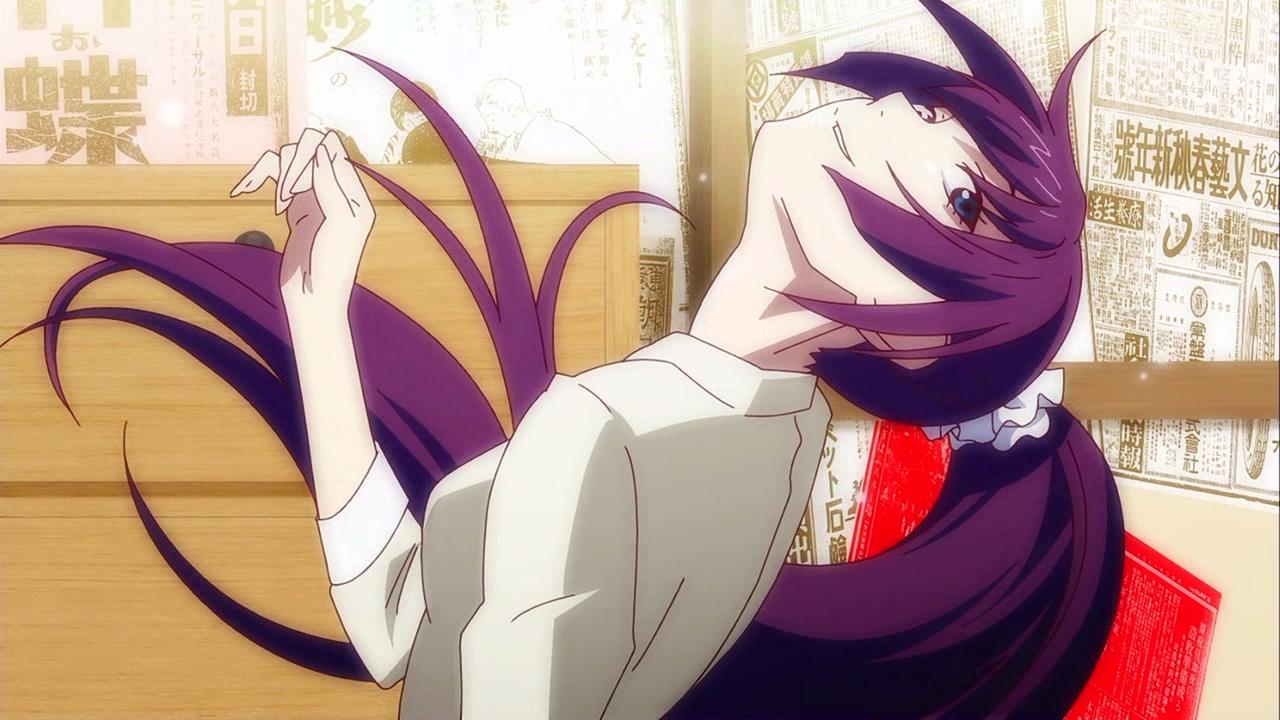 I'm such a fool for liking this quirk...

What about the totally horned-up perv character quirk? You know like Mineta Minoru from MY HERO ACADEMIA?

No matter the situation, you never know when he's going to...pop off. 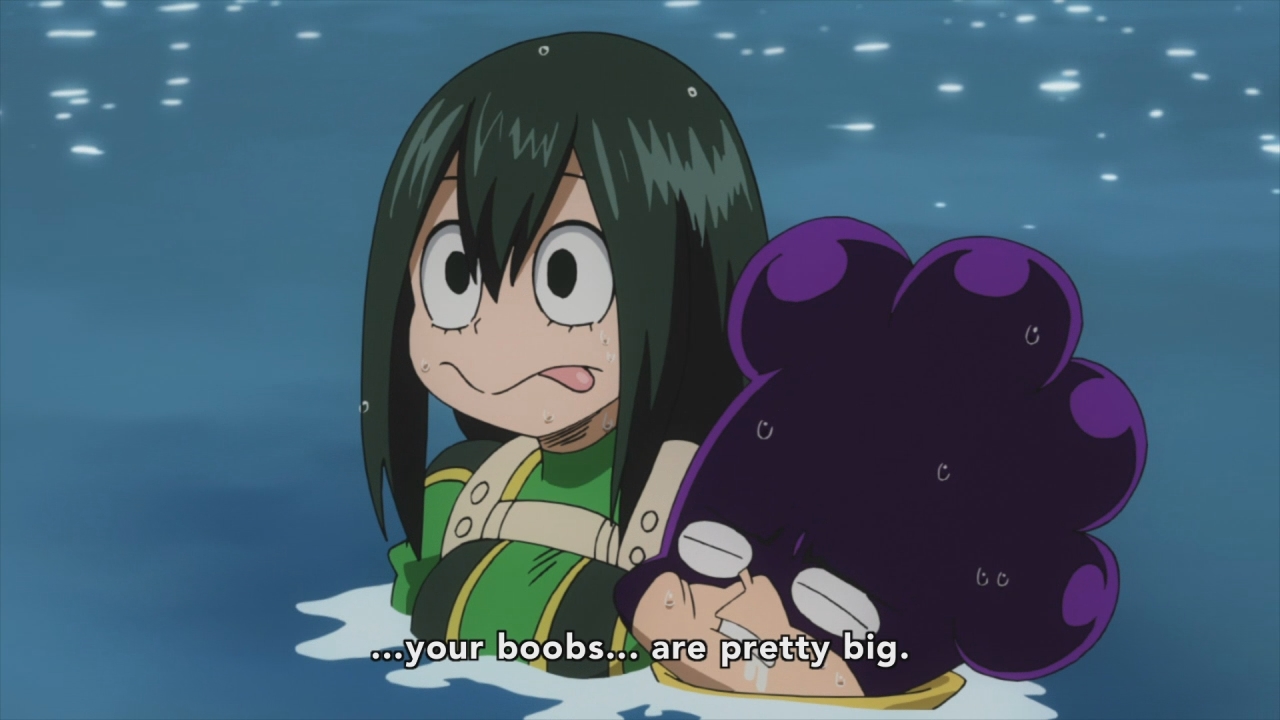 (Brought to you by the Froppy is True Best Girl International Alliance)
After 14 years the ElectricSistaHood podcast has ended!! Check the site for the sisters doing streams and videos
Top

Had to think for a while but then it hit me. I love me some tranquil fury. When a character becomes so immeasurably furious that they become very eerily calm and focused. Bonus points if the character is normally very loud and animated. It's just really unsettling and cool to the see the sudden change in personality and know that some smackdown is gonna be laid. Only example that comes to mind is Whitebeard in One Piece after the spoiler-that-will-not-be-named. A thing happens that you think will make him fly into a rage, but no. He just becomes very quiet, very stonefaced and then proceeds to WRECK SHIET. THAT is my jam.