I don't recall many anime episodes that specifically featured pizza. There was, of course, the tie-in with Pizza Hut in Code Geas -- which was scrubbed from the original U.S. release, incidentally. And there was the Samurai Pizza Cats, which was a rebranded Tatsunoko series, originally titled Kyatto Ninden Teyandee. Plus several un-memmorable occurrences in various anime series.

But instead, I think I was always more impressed by the Japanese form of pizza, known as Okonomiyaki. Pizza and Okonomiyaki are similar flatbreads with toppings baked on top (or inside) its crust. Flatbreads in general are one of the most common of dishes across the world, in multiple cultures and historical periods, so it is not surprising that Japan has its own variation on a similar theme to the Italian-American cuisine. Okonomiyaki's crust is somewhat like a pancake with cabbage added, and with various toppings on top. But the one common ingredient beyond the crust is the Okonomiyaki sauce, which is very similar to the Tonkatsu or Yakisoba sauces for those respective dishes. I've had it once, and found it to be quite tasty. So when I see that in an anime, my eyebrows rise and a smile breaks out on my salivating mouth. 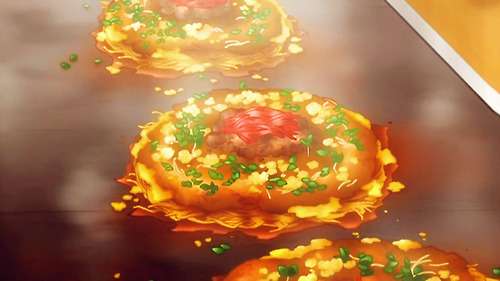 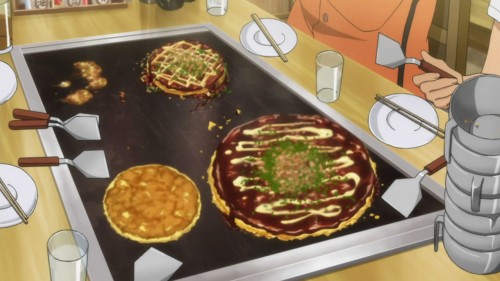 I would say Noragami. In episode 2 Yato and Yukine going broke with no jobs coming in eat out on Hiyori's dime. The waitress can't see Yato and Yukine due to them being a god and a spirit, so the waitress thinks the large pizza is just for her. 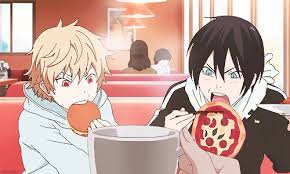