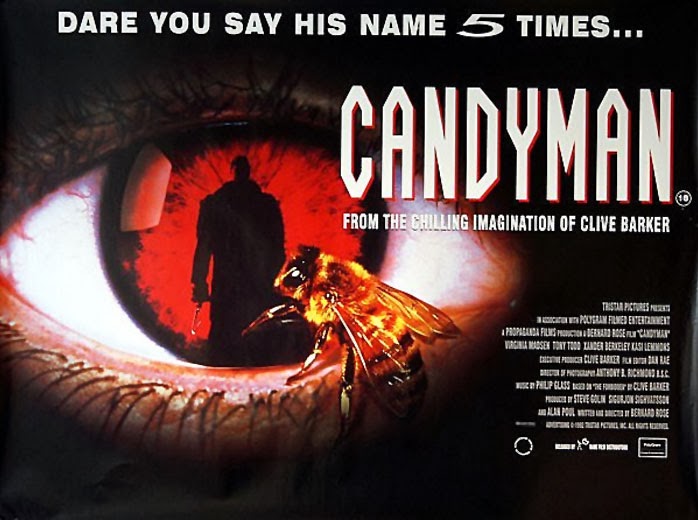 The horror genre is perhaps one of the genres that abuses concepts and settings more than academy bait movies. Which means writers and directors are desperate to come up with a bankable character or premise. This allows them to stand out and try to milk a franchise for a paycheck. Assuming it resonates in anyway with the audience.

So we have Candyman (1992). Which would make you think it has to do with an evil version of Willy Wonka that murders adults with confections. Instead it’s about an urban legend about a man who was murdered by having his hand cut off, then covered in honey and stung to death by bees. This somehow allows him to be summoned by saying candyman in the mirror. You can hear us completely butcher the plot, according to the live chat, more deep in the show.

Tim then talks about Maniac Cop 2(1990). It picks up where the first leaves off. Using some recycled footage of Bruce Campbell in order to avoid paying him his lofty salary of gas money to be replaced by someone who’d work for a credit. The titular maniac cop teams up with a serial killer and proceeds to murder more cops. He’s stopped by the mayor admitting the cop was set up and murdered in prison. With him laid to rest there’s a confusing stinger where the undead cop punches through his grave because the series hadn’t yet become unprofitable.

Weltall then talks about Skyscraper(2018). The movie that clickbait pricks did their best to try and stir up controversy because Dwayne Johnson has the audacity of playing an amputee without being an amputee. In the end, no one cared and the movie was nearly unnoticed. It’s about an advanced, computer controlled office building taken over by a terrorist organization. This turns out to be part of a plot to recoup insurance. Which is surely the easier option of recouping your money rather than just not investing it.