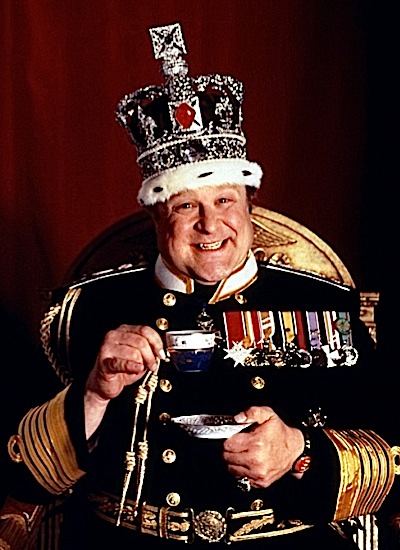 Dan. Dan? Dan! If you were unfortunate enough to have grown up in the nineties you probably heard a shrill harpy cry that out to in deafening peals to cast and audience alike. It was his stalwart resistance to the sonic assault that earned John, then without surname, his moniker of Goodman. Once he sealed the demon back in the oubliette, he was free to pursue an acting career. Of which we have two particular gems.

Up first is King Ralph(1991). A movie Tim recalls having seen on the shelves in his retail days but never watched because it in no way looked good. In it, the entire royal family dies because the English understand nothing about photography. They hunt down the only surviving heir who is an American played by Goodman. He wears a Packers jacket so naturally he’s uncouth and doesn’t fit in at the English court. That of course means wanting fast food, being clumsy and playing “rock and roll” music to stiff British upperclass.

Onto something more modern, we look at Once Upon a Time in Venice[2017]. It actually stars Bruce Willis as the only private investigator in Venice Beach California. Goodman is his friend who’s wife is leaving him and so he closes his surf shop and loans Bruce some of his money. There are a lot of intertwining stories that converge nicely at the end.