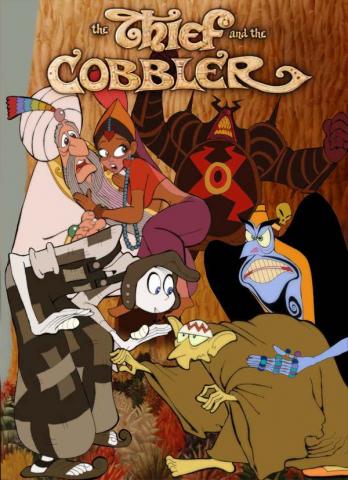 Did you know we’ve had a standing request for a movie since before the beginning of Popcorn Pulse? Of course we’ve been so lazy we mostly do things that are within easy reach or recently watched. It’s not like we review most everything out of convenience rather than for content. Which is why we’ve talked about so many Youtube channels, surely.

The Thief and the Cobbler – The Recobbled Cut. What happens when a film spends thirty years in development hell before being legally snatched from the hands of the director, chopped into bits and blended with suet before being pushed into theaters? You’d get the cut of this movie that ended up in theaters. The recobbled cut is the recovered footage and stills made into the film. The animation is incredibly impressive especially considering it was made in the era before computer assisted animation was the norm.

Weltall then talks about Anomalisa(2015) which lost the Oscar nomination to Inside Out. It’s animated using stop motion and panders to the art loving crowd by being as dull as matte paint samples under florescent light. It also features puppet dick as a boring guy finds himself bored by everyone except one woman. Unfortunately that’s spoiled by him sleeping with her.

Tim then talks about Wizards(1977). It’s a Bakshi film set in a post apocalyptic earth where magic has reappeared after a nuclear war. Two wizards born at the same time are polar opposites and must battle to the death because the bad one found nazi war footage that somehow motivates his army to kill. The good one has to get help from a gnome and a fairy with erect nipples in getting to his evil brother to shoot him with a luger. Not a word of this is made up.