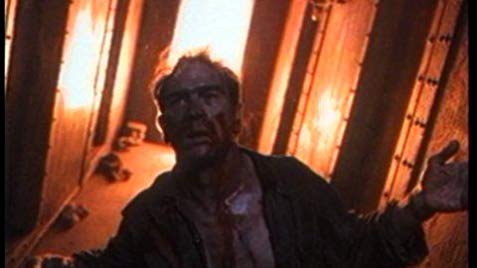 The nineties had a window in ninety four where villains had to one man armies with overly clever gadgets. One such entry is Blown Away(1994). Tommy Lee Jones plays a leather coin purse who was an IRA member in jail. He’s a master bomb maker who escapes prison and heads to Boston for revenge.

Jeff Bridges plays a member of the bomb squad who was once also in the IRA. Jones blames him for being in jail as Bridges realized the bomb maker planned to blow people up and turned him in. So there’s a lot of explosive set pieces though it drags on way too long. On the upside, it’s nice to see Lloyd Bridges in a supporting roll outside of a comedy.

Tim then reviews 1941(1979). Imagine Stephen Spielberg wanted to make a comedy about WWII. Now imagine you had Dan Aykroyd, John Belushi, and John Candy. Naturally you’d make a movie about a small coastal town that sort of almost gets attacked by a rogue Japanese submarine which is also staffed by a couple of Nazi’s. And none of those mentioned actors would be the main focus. It would instead be about a boy who wants to date a girl and enter a dance contest.

Weltall then talks about The Mandalorian. It’s remarkable how removing some of the staples from the universe of Star Wars like boring space monks and lightsabers, livens things up. Don’t worry though, for ever familiar element they leave out, Disney doubles the other. More Mandalorian armor, references to assassin droids, a baby yoda. Weltall declares that it all works thus far with some concerns of how well it’ll hold as the series progresses.