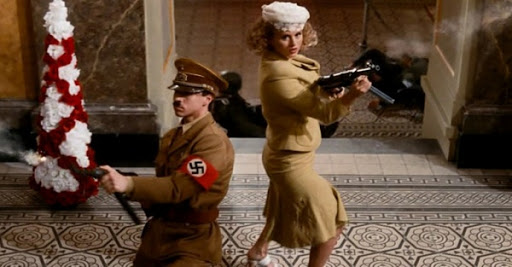 Get out your potatoes. Dust of the ushankas. Practice your metal work skill and learn to chant with your fellow proles. Because we’ve dragged out a movie from the land of Tetris. We jointly bring you Hitler’s Kaput![2008].

Weltall was curious as to what exactly passes for comedy in the land that gave us both Putin and Yakov Smirnoff. It’s set in World War II. Our protagonist is a Russian spy who’s part of the upper tier of the National Solcialists Super Secret club. He siphons off intel as the war winds down and gets sent a love interest because he’s in danger or because they need tits. There’s a fuck load of anachronisms for the sake of comedy. But the best has to be the Russian man covering “Oops I did it again” in English with an accent so thick that it can stir gazpacho.

Tim then ducks into Dodgeball A True Underdog Story[2004]. The Vince Vaughn film of the early aughts. There’s a gym which is going under because their mortgage is up and a corporate gym is threatening to buy it. So they need to raise money quickly which means entering a dodgeball tournament.

Spontaneous[2020]. You want a movie starring teens that feels like it was written by someone in their forties? Yeah, that’s basically all teen aimed media. People star bursting into flames. So some people get grabbed and taken to be experimented on to develop an anti combustion pill. Which works until it doesn’t and no one gives a flaming shit.