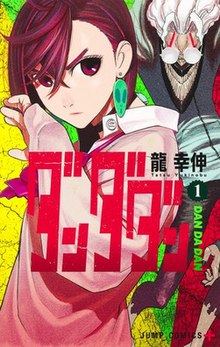 You might look behind me and see what appears to be a mound. I assure you it;s actually much more architecturally impressive that it seems. You see, excavations have revealed this is the site where the unsold copies of Princess AI were piled. Note the faint remains of bloodstains on these pages. This indicates the sacrifices the locals made to banish Stu and his creation back to the reaches of what we might think of as hell.

Tim has Dandadan. It takes place in a high school where our protagonist, Momo, stops a nerd from being picked on. This leads them to an argument on whether spirits, which Momo believes in, or aliens, which Ken the nerd believe in. This leads to them both finding out they’re both right as an abduction and a possession take place. It gets a Crackers.