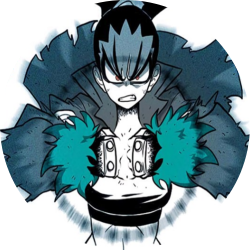 What time is it? Manga time. Not just any manga but dos, dos dos manga! Which you should really be expecting now. Unless you’re one of those weirdos who’s tuning in for the very first time. We’re not saying you’re unwelcome but we’ve got our eyes on you. One from each of us. The other is busy watching the souffle.

Tim has Burning Effect. It’s the future and, like most fictional futures, the world has gotten worse. Apparently people live too long and overpopulate everything. So they make all crime carry the death penalty so they can execute some mother fuckers. This does not result in a helmeted class of gruff judges on hover-bikes. Instead it results in an anime organization with varying power levels which go around murdering people for jaywalking. Burn is our protagonist and discovers she can fight when she assaults a local constable. It gets a Borders.

Weltall takes things in a different direction and reviews BRZRKR. No, our keyboard isn’t hating on vowels. It’s the graphic novel which Keanu Reeves kickstarted awhile back. It features a protagonist who has regeneration powers and wants to die. Also he looks like Keanu as John Wick because that’s just how Reeves shows up these days. It ends up in Borders territory.