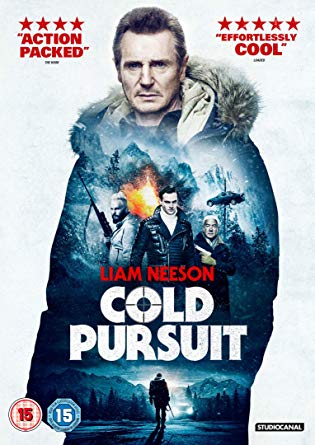 It may not be a special number but we happen to like the triple digits. So we just had to pick a theme of some sorts. We couldn’t come up with anything particularly uniting so we decided to hone in on movies set in our home state.

We begin with the fairly recent Cold Pursuit[2019]. The Liam Neeson film that turns out to be an American remake of a Norwegian film. Neeson plays a snowplow driver at a fictional ski town in the Rockies. His son gets killed by a drug dealer and Neeson decides to break out the vengeance bit one more time. There are some colorful characters and a few jokes but it’s a bit long.

Then we both decided on the same film for our second, Things to Do in Denver When You’re Dead(1995). It’s an Andy Garcia film from before he gained weight to scare off predators from his nest. It’s a copycat Tarantino film where Garcia used to work for the mob and gets pulled back in for a job. The job goes bad and the crew is going to be killed as punishment. Andy decides to go out in a blaze of glory by killing some henchmen of the mob boss. It’s one of those movies where everyone dies but at least Christopher Walken gets to ham it up a little