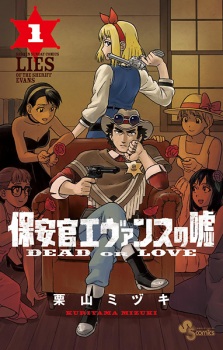 After climbing through sewers, sifting through coins and murdering random plants, the acid has finally worn off. Tim and Weltall have climbed back out, cleaned themselves off, posted bail, and broke into a closed Borders warehouse to read some manga. It took them a long time to find something original buried among the unsold copies of Princess Ai.

Tim reviews Hoankan Evans no Uso. This is basically what happens when when a mangaka snorts meth and watches a Sergio Leone marathon. It’s about a legendary lawman in some vague part of the Old West. While he’s proficient at catching criminals, he has yet to land a girlfriend and is contstantly stirking our while trying to use his father’s advice which fails. Once some characters are established, the plot picks up and the humor begins working getting it up to Crackers.

Weltall then digs into Dolly Kill Kill. It’s about rejected character designs from Five Nights at Freddy’s suddenly appearing and ushering in the apocolypse. The first couple of chapters set things up and skip forward about a year. Our main character finds a group of survivors who are attempting to find the creatures weaknesses. Give the strong characterization and solid story, it earns a Read it Now.