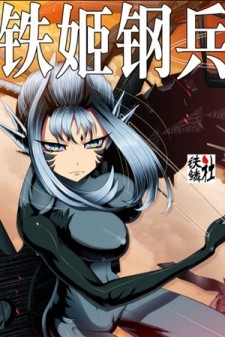 Weltall and Tim, once again, can never seem to agree on the varying pronunciation of the term for comics depending on the source. There may be an official and sanctioned way to pronounce the subtle differences between manga, manhwa, and manhua but looking them up would take something akin to effort. Even if they wanted to, you’ve come to expect far less and we can’t break with tradition now.

So Tim has Iron Ladies, a manhua. In the future of this world there is space travel and other planets. They are conquered and fought for by cyborg women. Our hero is broke, beyond graduated from college and his girlfriend is leaving him. SO he joins the military and immediately ends up in charge of some of these women. Where you think this might be going gets entirely changed when he’s thrown into a vat that make women cyborgs, and kills men, only to emerge a cyborg himself. It gets a Crackers in the hope that the plot settles down into coherence later on.

Weltall’s Oh Lord Jesus takes up back to the land o Japan with a protagonist who can see ghosts. He’s a loner and a loser who only has one friend, a ghost. Everything gets shaken up when the class president/idol girl approaches him and says she likes him and has since they were kids. Also they made a promise. Unfortunately she gets hit by a truck and ends up in a coma. But her spirit is loose and he can see it but pretends he can’t. It gets a Crackers for some of the character interplay.