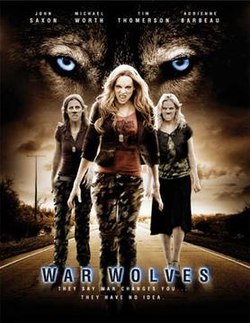 Oh shit, is it the movie show again? How about a movie about soldiers who are werewolves? No, not Dog Soldiers, we’ve already done that. We’ve got War Wolves[2009] who are barely soldiers and only wolves in that they put in fangs from a Spirit store special. A group of coed soldiers get bit during an attack in the mid east.

Fast forward six months later and the three ladies are trying to get pack together. While one of the three men kills the third, leaving the main character to battle with him way later. Most of this is him whining about being a werewolf, drinking, and working retail. Also, the stinger at the end is that Elvis is still alive for no reason.

Tim talks about Strangers With Candy. A series staring Amy Sedaris. She plays Jeri Blank, a post menopausal woman who goes back to high school. It’s short and mocks the after school special wth each episode tackling a different topic. There’s also the movie which exists and has Chris Pratt but not much else of note.

Weltall then talks about the youtube channel Lock Picking Lawyer because he hates the Office and got bored with the Mandalorian. As it says on the tin, it’s about a lawyer who picks locks. There’s something both fascinating and soothing watching someone break into a lock in a matter of seconds. Especially since we never bother with locks and rely on twist ties to keep out goods secure.