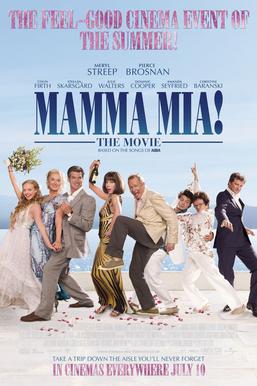 You know what sucks? Being reminded of the disco era. So naturally we sought out a movie that takes the cheesiest band who’s songs were adapted into a shitty musical and then into an equally shitty movie in Mamma Mia [2008]. Too long, didn’t care, girl is getting married and wants to invite her dad. Mom fucked around and it could be any of three guys. She invites them all to the island and mom and the real dad end up hooking up again in between Abba songs.

Tim then talks about Mongrels[2011]. A British show with puppets that make wonderfully off the wall jokes and musical numbers. They also take advantage of the cut away gag, which was quite a feat considering the work that had to go into the puppetry and constumes. Tim sorely misses it and wishes it had gotten more than twelve episodes.

Weltall then hits Hellboy[2019]. What happens when you don’t sign a big galoot to play Big Red? You get the sheriff from Stranger Things to grumble around in lazy makeup. Add in songs randomly because, hey it worked for James Gunn, and a plot that puts the audience asleep. As long as people show up to clap for things they’ve seen before, it can’t possibly lose at the box office. Right?