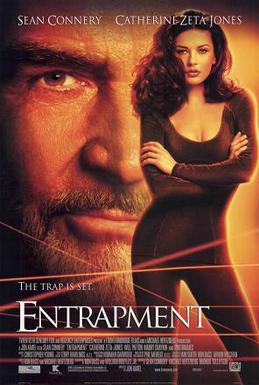 What was it with the nineties and heist movies? Was there a memo somewhere in Hollywood that was said “money is boring, they must steal art!” There might have been if just so the plebs don’t get the idea to rob the movie execs of their money. No doubt kept under a dirty mattress next to a moldering hooker.

We have Entrapment(1999). Sean Connery is Mac, a thief who claims to be retired. Catherine Zeta Jones works for an insurance company and wants to frame him for a job. Catch him red handed and then let the FBI and the company nab him for good. Which is an interesting plan. Looking to put a man who’s at least sixty in jail for longer than ten years seems wasteful. Oh no, we’ve been distracted by lasers and skin tight outfits.

Weltall has Drive Angry[2011]. Nic Cage is a dead man who’s daughter has been killed by a cult. They’re also planning on sacrificing his granddaughter. So he climbs out of hell to chase after them while pursued by Anubis. He also has a magical gun that can kill even the devil himself.

Tim talks about Black Books. A Graham Lineham show about an Irish drunk who hate customers but runs a bookshop, another guy and a girl. The eagle eyed among you might have noticed something of a pattern. His opinion is that it’s a decent watch if you like British comedy and have ever worked retail. Especially someplace that sells books.