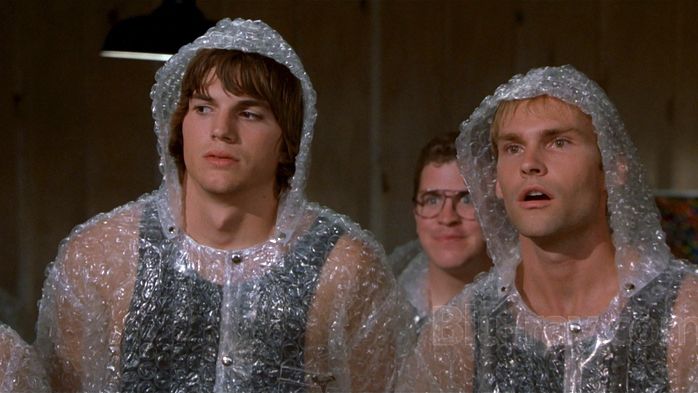 If you were anywhere near a TV in the late nineties you were exposed to Ashton Kutcher and Sean Williams Scott shouting dude and sweet at each other. A gag which Tim swears goes on for a third of an eternity. That’s right, we’ve got a comedy today in the form of Dude, Where’s My Car[2000].

What happens when a pair of stoners wake up from a bender with their car being lost? Also, is it a bender if it’s implied weed? Either way, Kutcher and Scott had a night out on the town and everyone is mad at them. Kutcher is certain they have presents for their girlfriends anniversaries in his car which has gone missing. This leads them to having to find an alien device which can also destroy the universe.

Tim stays in comedy territory with Stay Tuned(1992). A John Ritter movie where he plays a couch potato. In anger, his wife breaks the TV. Luckily Jeffrey Jones, appropriately playing an agent of satan, offers him a free trial of a satellite. Which oddly has only satanic programming. Also it pulls Ritter and his wife into hell and they have to survive for twenty four hours.

Weltall then does No Time To Die[2021]. If features Daniel Craig in his last appearance as James Bond. Also it’s been delayed for almost two years and has finally made it into the theaters. The review has spoilers so if you’re looking to see it fresh, you might want to close things down when Weltall starts up. We won’t put anything else here, so consider yourself warned.