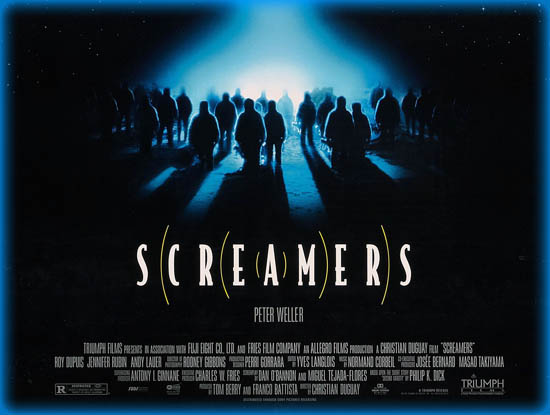 Given how Tim seems to pick movies that drive Weltall insane, he offered Weltalla choice. Unfortunately, he failed to exercise this option before the show loomed large. This left Tim with the autonomy of choice. Naturally he picked something from the nineties that was probably dredged from the bottom of a dollar bin and previously viewed.

The joint discussion, once it begins, is Screamers(1995). It’s a very similar plot to that of Avatar mized with Red Faction. There’s a valuable mineral on some planet or moon which the earth wants. Some of the local miners revolt and start a war. The earth coporation governement decides robot that can kill the locals is the best solution. The movie starts when something goes terribly wrong, of course.

Tim then briefly talks about Midnight Run(1988). It features Robert De Niro before his tough guy persona became the punchline in Ben Stiller comedies. He is taked with recovering Charle Grodin who skipped out on bail. Robert has to take Charles from Los Angeles to New York within a week while trying to keep him away from the FBI, the mob and other bounty hunters. He doesn’t manage much to say about it, other than it’s a good flick, blaming time.

Weltall then talks about a Youtube channel, Frank Howarth. Tim rolls his eyes which prompts Weltall to argue that Tim seems stuck on movies. With that out of the way, the content of the channel, named after the creator, is mostly woodworking with insane tools on projects most people will never accomplish. While there are more than a few channels and shows like this, the presentation and effot Frank puts into his videos is astounding. He turns a large majority of his project into a stop motion film and the scope of effort involved is often mind boggling and an experience well woth the price of admission.